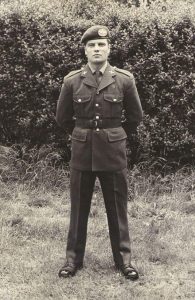 Steve Tuffen was serving with the Second Battalion Parachute Regiment in the Falklands, when he was shot in the head twice during the battle of Goose Green in 1982. As Steve was hit less than 100 metres from enemy lines, he was considered to be too exposed for anyone to attempt his rescue. He lay there for four hours before he could be evacuated and have his injuries assessed.

‘They took my helmet off and the brains actually fell down the back of my neck, so yes, I’m a lucky guy.’

Steve was transferred back the UK where he underwent hours of surgery, over several operations, to partially restore his sight, but he was left with permanent visual field loss and is now registered blind.

‘At one stage during my recovery in hospital, I didn’t even realise I had a head wound. I went to scratch my head and there was no skull there.’

Steve did not meet The Not Forgotten until many years later, when he was invited on a fishing trip to Cornwall. Here he met veterans of varying ages, services and injuries,

‘That first trip was invaluable. For the first time in a long time, I felt able to totally relax and enjoy the company of other veterans as I spoke openly about the effect of my injuries without being under scrutiny. These guys understood as they’d been through similar experiences but in different ways. We were able to swap stories and get things off our chests without worrying it would have a negative outcome.

The Not Forgotten’s ethos of friendship is so reassuring and I made friends for life on that trip.’

Steve has been closely involved with The Not Forgotten since that first fishing weekend,

‘The understanding and help given to me with regards to my disabilities is just fantastic and I’m never made to feel uncomfortable when asking for help. It also means a great deal to me that my wife can attend some of the events. She has been through some difficult experiences due to the after-effects of my injuries, and so for her to receive a little recognition means the world.

The Not Forgotten have given me the opportunities to do things I never thought possible after losing my sight 37 years ago, including riding a bike, and encouraging me to overcome huge personal boundaries. What this has meant to me is almost impossible to put into words.

This is certainly a charity that is very close to my heart.’