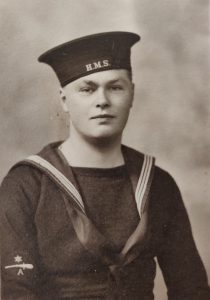 Cyril Banks enlisted in the Royal Navy in 1943, aged 18, and joined the minesweeper HMS Ready. Cyril’s first months at sea were spent in the harsh Arctic convoys and in the North Sea patrolling for German U-Boats. HMS Ready was then deployed to the Channel to help with the minesweeping efforts leading up to the D-Day Landings. On D-Day itself HMS Ready led the mine-clearing flotilla off Gold Beach. Under constant threat of being hit by coastal guns or German aircraft, it was a gruelling task, both physically and mentally,

‘We saw bodies floating in the water, including an American paratrooper who became caught in the cords of his twisted chute when he down in the water. We found him drowned but later gave him a decent burial at sea. The horrendous things that were happening will live in my mind forever.’

Cyril later served on LST (Landing Ship, Tank) craft in the Channel before sailing to the Far East, where he took part in operations against the Japanese and assisted in the repatriation of Australian POWs.

It was not until 1999 that Cyril first encountered The Not Forgotten, but it would prove to be a pivotal moment in his life. Since that trip, Cyril has found a community and has become a great ambassador for The Not Forgotten, fundraising for us at Stansted Airport, abseiling 110ft off a water tower at the tender age of 88 and wing-walking for 12 minutes on a bi-plane that reached speeds of 90mph.

‘I never thought retirement could be so full of life. The Not Forgotten has given me so many opportunities to meet other veterans, young and old, and I have made so many good memories.’