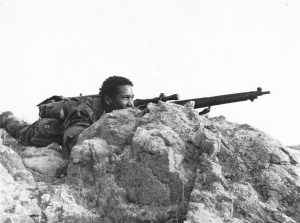 John Liddie joined the Royal Marines at the age of 16. Over the next four years he deployed to Malta and Cyprus as well as carrying out short tours of Corsica, Sardinia, Crete, Turkey and the USA.

Young and fit, John still had his whole career ahead of him when, during a 200ft abseil from a helicopter at NAS Yeovilton, his equipment failed and he fell. Landing in a horizontal position, rather than on his feet, John fractured his T6/7 vertebrae which led to severe bruising of his spinal cord. Aged 20 at the time, the incident ended John’s career with the Royal Marines as he was medically discharged in December 1974. John has been a wheelchair user ever since.

John first got involved with The Not Forgotten through the British Ex-Serviceman’s Wheelchair Sports Association (BEWSA), when he was invited to attend a Not Forgotten Garden Party at Buckingham Palace,

‘The Not Forgotten is pretty unique in the way it brings veterans and serving personnel of all ages and services together and it’s fantastic. Meeting up with people who have a similar mindset to you, even if they are much older or younger or from a different arm of the Forces, is an important way to find that feeling of comradeship.

Mixing in varied groups allows you to swap experiences of your Service life, injuries and recovery in a safe space and these conversations can form into friendship but also open up possible alternative routes to recovery that you may not have tried.

Even if you lose touch with them for a couple of years, you always know that The Not Forgotten will be there to lend a helping hand when the going gets tough. Not only do they offer a great communication space for ex-Service personnel to interact with each other, but they can also offer advice or provide assistance for issues that are not generally available in civvy street.’