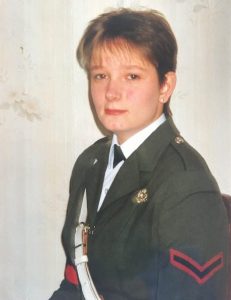 Caroline Beazley was serving with the Royal Military Police in 1994, when she was shot by a sniper in the face, head, back and hand. Despite the shooter standing just 10 metres away, Caroline’s ill-fitting helmet – which she’d stuffed with padding – saved her, but she was still left fighting for her life.

‘I knew that if I shut my eyes as I lay on the ground in a pool of blood and knocked-out teeth I would not wake up again. My first thoughts were obviously of my family and people I loved. I so desperately didn’t want to die alone on the streets of Belfast.’

Caroline’s injuries were so severe that the medical teams evacuating her did not immediately recognise her as a woman, calling her ‘Son’ as they drove her to hospital.

‘I remember looking at myself in the mirror in hospital, the first time I had seen myself since the shooting. Staring back at me was a swollen, scarred, broken face, unrecognisable as the person I once was. My face and head were held together with what I can only describe as facial scaffolding; I had pins in my chin and forehead, a silver frame connected by nuts and bolts, and my teeth wired up like a character from a James Bond movie. My only form of verbal communication was a hole in my throat which I had to cover to make a sound.’

Once discharged from the hospital and the Army, the then 22-year-old Caroline began the long journey of recovery from both her physical and mental wounds. Whilst the former healed well, the latter is still a work in progress and, as a result, Caroline did not attend any public social events until she was invited to The Not Forgotten’s Garden Party in 2016.

‘When I left the Army, I felt like I’d been chucked on the scrap heap. Like many other injured servicemen and women my very promising career was cut short; I couldn’t do the job I had trained to do and I felt forgotten about and that hurt. For me, meeting other injured servicemen and women through The Not Forgotten was the moment when the switch was flicked, the light in my head came back on. We are all one family, no matter what service we come from, bound together by an invisible thread and that means a great deal.’

Since meeting The Not Forgotten, Caroline has gone on to be interviewed by Dan Snow on national television, have her photographs taken by Peter Zownir and competed in the Israeli Veteran Games.

‘If you’d told me just 4 years ago that I’d been confident enough to achieve all these things, I wouldn’t have believed you for a second. The last 26 years have not been easy, and I’m not fully there yet, but the support of my loving family, my wonderful son and The Not Forgotten has helped me like you wouldn’t believe – I can’t thank them enough.’