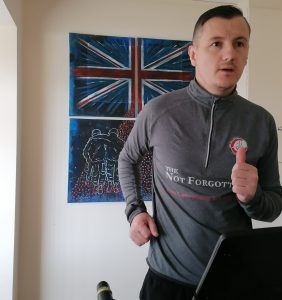 Anthony Lock joined the Royal Welsh regiment when he was just 17 and served for 10 years in Kosovo, Iraq and Afghanistan. While in Afghanistan, the armoured vehicle he was commanding was hit by a major blast – it was the second blast he’d been involved in over the past 6 weeks. Anthony suffered spinal damage, a broken back, shoulder and skull, brain damage and muscle injuries. He lost his career and was diagnosed with complex post-traumatic stress disorder (PTSD) which he said left him lonely, vulnerable and isolated.

“I wasn’t sleeping at night. I was reliving my memories and my nightmares. In 10 years before I was injured, I’d lost 9 friends. The Not Forgotten has been phenomenal for me. They’ve changed my life and they’ve picked me up, and if they can do this for me, they can do it for anyone. I’ve always wanted to ski in my life, but when I was told I might never walk again because of my injuries, I never thought it was possible. I phoned The Not Forgotten and they asked me if I wanted to come skiing on their next trip to America. I couldn’t believe they had offered me hope straight away. They didn’t know who I was or what I’d been through, they just knew I was lost. I might not be here today without their continued support.”