We are constantly amazed by the dedication, generosity, imagination, and sheer ingenuity of those of you who raise money for The Not Forgotten in all sorts of ways.

We want to give a huge heartfelt THANK YOU to each and every one of you who has hosted, attended or donated to an event, or undergone a major physical feat of endurance in our honour!

A team representing The Not Forgotten – including our Head of Events, Rosie, as well as Stu Parker, Martin Beard, Dr Kam Khan and Chris Last – tackled the gruelling Half Marathon des Sables in Fuerteventura in September, completing three days and nights trekking in the desert, raising funds for us with every step.

DD Johnson, one of our regular fundraisers, has tackled as his latest endeavour the climbing of 82 ‘Munros’ (a Scottish hill over 3000ft)… he completed this in July 2022 raising over £3,000 but has since decided to climb all 282 Munros!

Mark Rosales organised a charity car event in aid of The Not Forgotten in September 2022 with 70 Abarths and Minis taking part from around the country, raising over £400.

At the beginning of September we were the chosen charity for The Orsett Show, a traditional farm and country show in Essex. We had an information stand at the event which raised £400, and the Orsett Show organisers have since donated a huge £3000 to The Not Forgotten.

Jake Lane – who many of you will know as our events medic – did a sponsored weight-lift in which he successfully lifted the equivalent of a CH47 Chinook in under an hour(!) raising over £800.

Debs Carson spent months clearing litter from her home village of Denmead in Hampshire. Working with a fellow villager and supported by the rest of Denmead who dug deep to sponsor her, she walked over 40kms to remove 3 tonnes of litter from hedgerows, ditches and roads, raising an amazing £1,205 to be split between us and fellow veterans charity Turn to Starboard.

The Rotary Club of Ingatestone raised £3,500 for us by holding a Summer Evening Jazz concert in July, while The Jive Aces (who performed at the Summer Evening Jazz) also donated a further £1,000 raised at their Summertime Swing event in August.

Andrea Lees Farrell ran the London Marathon in October in a seriously impressive 5 hrs 13 mins, raising £2,680 for The Not Forgotten.

Max Jones organises a classic car show in Lichfield every year to raise funds for us, having taken over running the car show from his grandad (a dedicated fundraiser of ours) when he was just 10. The event featured over 100 cars and raised £760.

Gareth Butler, the organiser of Britain’s newest military pageant, chose us as the Tattoo’s dedicated charity. Pipers, drummers, bands, choirs and orchestras, PT and drill displays put on a spectacular show, and our thanks must go to Bianca Robinson and her daughter Chantal who manned our stall for us at the Tattoo (pictured) raising over £400.

Veterans Jack Cummings and John Brady took part in the New York Marathon in November, raising £2,000. Both put in a superhuman effort to complete the race, with Jack finishing 42nd in the elite wheelchair category!

Gregg Board and Pat Marshall organise a number of collecting tins around shops in their local area, recently raising over £500.

Long-time supporter and volunteer Dale, his wife Nadia, and their children set up a spooktacular Halloween display outside their home. Collection buckets hidden in treasure chests were all in aid of The Not Forgotten and raised almost £1,500 – possibly our most terrifying fundraising yet!

A small team of serving personnel and veterans raised money for us and other charities through personal physical challenges, aiming to have covered 1,920km as a group by Remembrance Sunday, when their final leg was a 22km walk to lay wreaths at Chesham Memorial.

Insurance firm Aston Lark held a golf day earlier in 2022, and have donated a massive £5,199 from the event.

Several of our supporters have named The Not Forgotten as their ‘birthday fundraiser’ on Facebook, so that family and friends donate to us via Facebook as a birthday ‘present’. A huge thank you to each and every one of you who has nominated us as their charity. 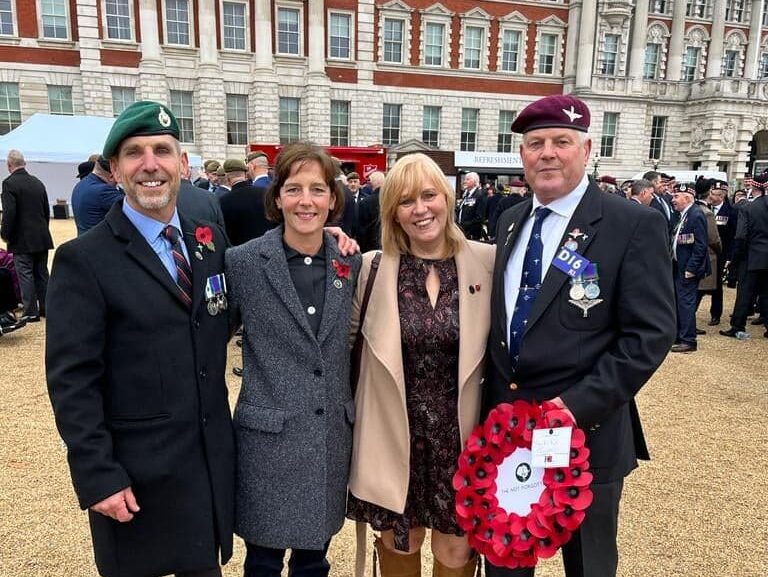